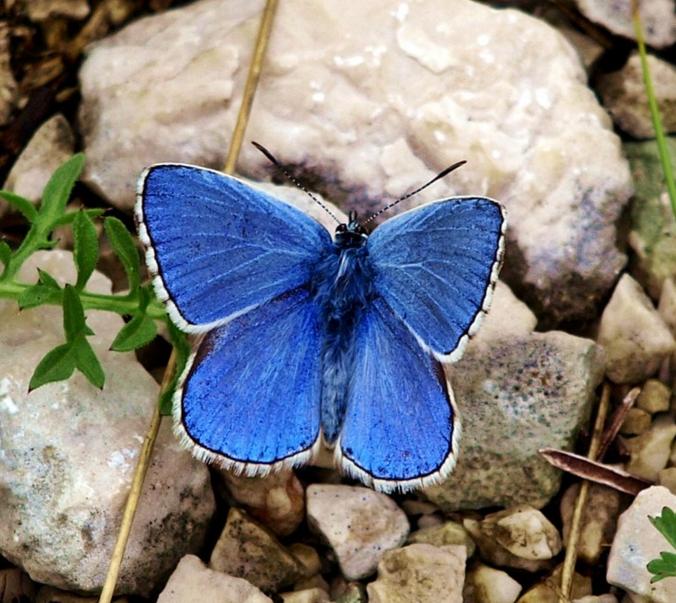 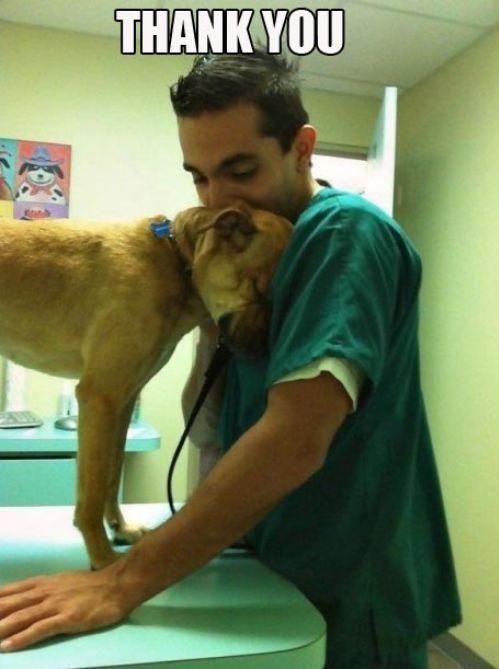 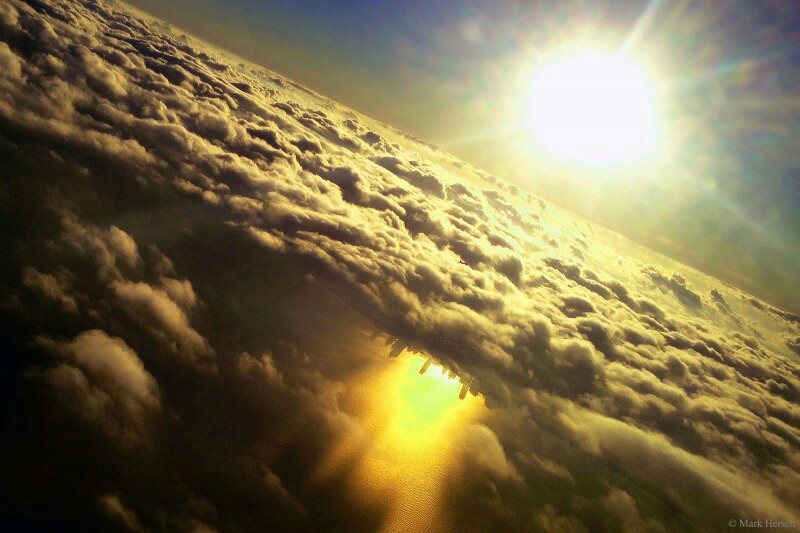 How could that city be upside-down? The city, Chicago, was actually perfectly right-side up. The long shadows it projected onto nearby Lake Michigan near sunset, however, when seen in reflection, made the buildings appear inverted. This fascinating, puzzling, yet beautiful image was captured by a photographer in 2014 on an airplane on approach to Chicago's O'Hare International Airport. The Sun can be seen both above and below the cloud deck, with the later reflected in the calm lake. As a bonus, if you look really closely -- and this is quite a challenge -- you can find another airplane in the image, likely also on approach to the same airport.
Image Credit & Copyright: Mark Hersch 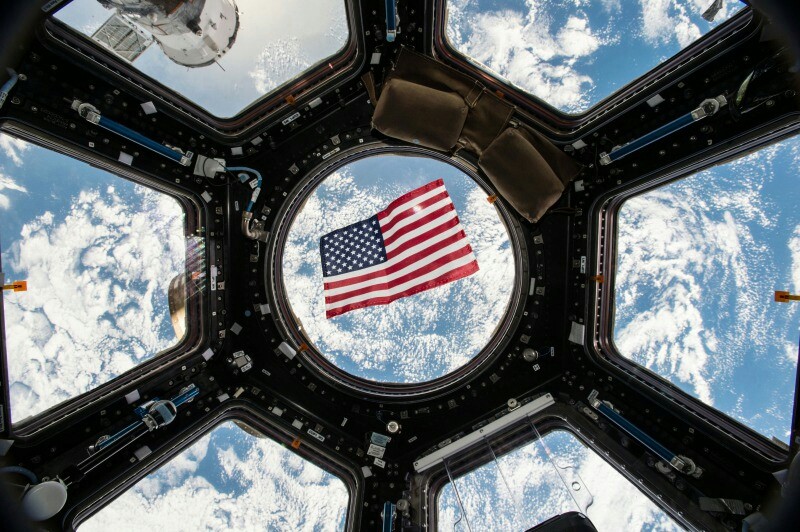 An American flag is visible in the windows of the cupola aboard the International Space Station. Thanks to a bill passed by Texas legislators in 1997 that put in place technical voting procedure for astronauts – nearly all of whom live in Texas – they have the ability to vote from space through specially designed absentee ballots. To preserve the integrity of the secret vote, the ballot is encrypted and only accessible by the astronaut and the county clerk responsible for casting the ballot. 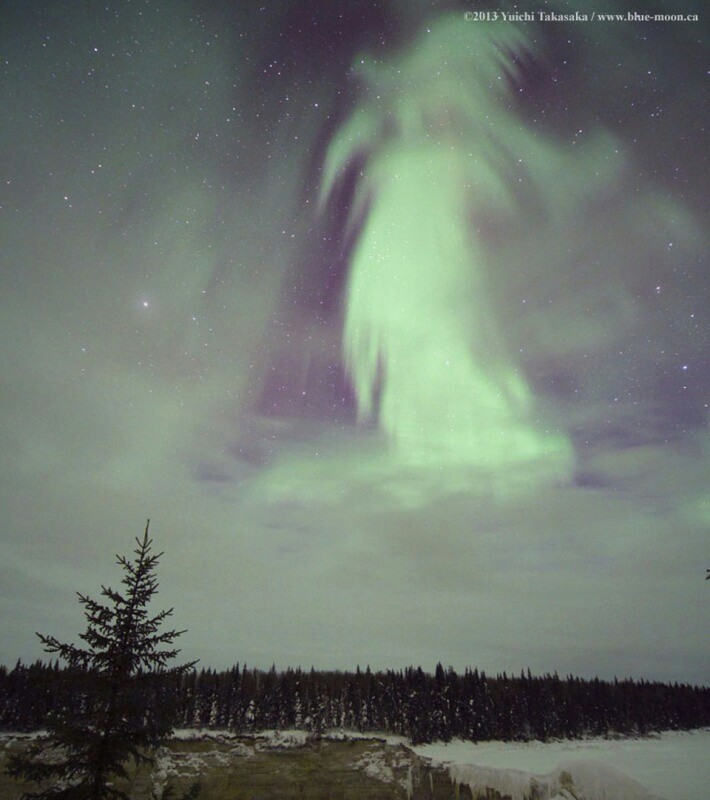 What does this aurora look like to you? While braving the cold to watch the skies above northern Canada early one morning in 2013, a most unusual aurora appeared. The aurora definitely appeared to be shaped like something , but what? Two ghostly possibilities recorded by the astrophotographer were "witch" and "goddess of dawn", but please feel free to suggest your own Halloween-enhanced impressions. Regardless of fantastical pareidolic interpretations, the pictured aurora had a typical green color and was surely caused by the scientifically commonplace action of high energy particles from space interacting with oxygen in Earth's upper atmosphere. In the image foreground, at the bottom, is a frozen Alexandra Falls, while evergreen trees cross the middle.
Image Credit & Copyright: Yuichi Takasaka 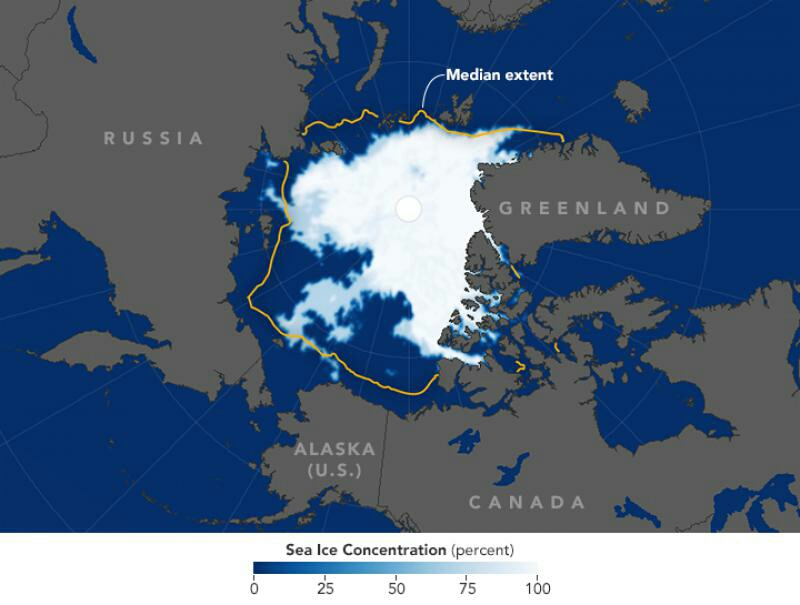 The 2016 sea ice minimum is effectively tied with 2007 for the second lowest in the satellite record. Since satellites began monitoring sea ice in 1979, researchers have observed a decline in the average extent of Arctic sea ice in every month of the year.

The map above shows the extent of Arctic sea ice on September 10, 2016. Extent is defined as the total area in which the ice concentration is at least 15 percent. The map was compiled from observations by the Advanced Microwave Scanning Radiometer 2 (AMSR-2) sensor on the Global Change Observation Mission 1st'“Water satellite operated by the Japan Aerospace Exploration Agency (JAXA). The yellow outline shows the median sea ice extent observed in September from 1981 through 2010.

The sea ice cover on the Arctic Ocean and surrounding seas regulates the planet's temperature, influences the circulation of the atmosphere and ocean, and affects life in Arctic communities and ecosystems. The ice cap shrinks every year during the spring and summer until it reaches its minimum extent in September. Sea ice grows during the late autumn and winter months, when the Sun is below the horizon in the Arctic Circle.

The 2016 melt season surprised scientists by changing pace several times. It began with a record-low yearly maximum in March, followed by rapid ice losses through May. But in June and July, low atmospheric pressures and cloudy skies slowed melting. Then, after two large storms blew across the Arctic basin in August, sea ice melting accelerated through early September.

'It's pretty remarkable that this year's sea ice minimum extent ended up the second lowest after how the melt progressed in June and July,' said Walt Meier, a sea ice scientist with NASA's Goddard Space Flight Center. 'June and July are usually key months for melt because that's when you have 24 hours of sunlight each day. This year we lost momentum during those two months.'

In August, two strong cyclones crossed the Arctic Ocean along the Siberian coast. The storms did not have an immediate impact, as a great cyclone did in 2012. But in late August and early September, Meier noted, there was 'a pretty fast ice loss in the Chukchi and Beaufort seas that might have been a delayed effect from the storms.'

New research affirms that Arctic sea ice has not fared particularly well in any month in the past three decades. An analysis by Claire Parkinson and Nicolo DiGirolamo of NASA Goddard ranked 37 years of monthly sea ice extents in the Arctic and Antarctic. They found that there has not been a record high in Arctic sea ice extent in any month since 1986. During that same period, there have been 75 new record lows. That pattern is reflected in the graph below.

'It is definitely not just September that is losing sea ice. The record makes it clear that the ice is not rebounding to where it used to be, even in the midst of the winter,' Parkinson said. 'When you think of the temperature records, it is common to hear the statement that even when temperatures are increasing, you expect a record cold month every once in a while. To think that in this record of Arctic sea ice there hasn't been a single record high in any month since 1986, it's just an incredible contrast.' 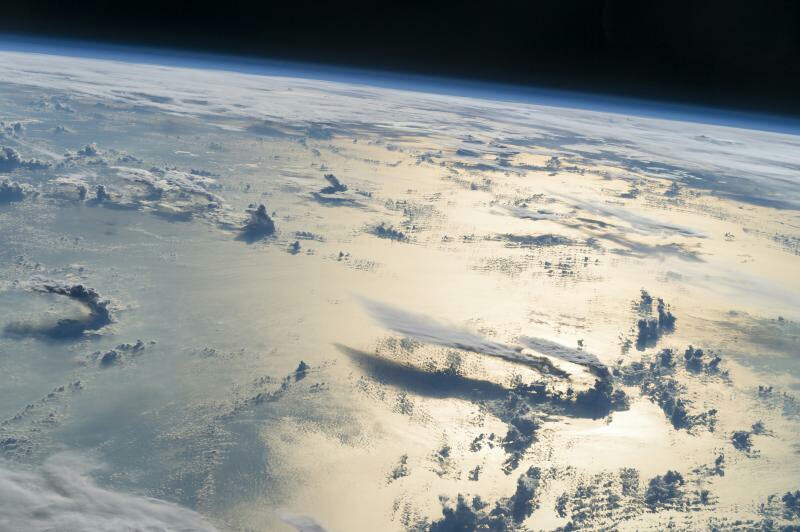 Flying over the Philippine Sea, an astronaut looked toward the horizon from the International Space Station and shot this photograph of three-dimensional clouds, the thin blue envelope of the atmosphere, and the blackness of space. The late afternoon sunlight brightens a broad swath of the sea surface on the right side of the image. In the distance, a wide layer of clouds mostly obscures the northern Philippine islands (top right).

Looking toward the Sun to capture an image is a special technique used by astronauts to accentuate the three dimensions of landscapes and cloudscapes through the use of shadows. Two large thunderclouds rise next to one another (lower right). These clouds have long tails, also known as anvils, that stretch nearly 100 kilometers to the south. Anvils form when thunderstorm clouds rise high into the atmosphere and reach a 'capping layer' thousands of meters (tens of thousands of feet) above sea level. Capping layers stop the upward growth of a cloud, deflecting air currents horizontally to form anvils.

NASA Earth Observatory (2016, March 21) East Indonesia Island Chain.
NASA Earth Observatory (2012, May 28) Sunglint and Clouds off Western South America.
Astronaut photograph ISS048-E-10018 was acquired on June 25, 2016, with a Nikon D4 digital camera using a 116 millimeter lens, and is provided by the ISS Crew Earth Observations Facility and the Earth Science and Remote Sensing Unit, Johnson Space Center. The image was taken by a member of the Expedition 48 crew. The image has been cropped and enhanced to improve contrast, and lens artifacts have been removed. The International Space Station Program supports the laboratory as part of the ISS National Lab to help astronauts take pictures of Earth that will be of the greatest value to scientists and the public, and to make those images freely available on the Internet. Additional images taken by astronauts and cosmonauts can be viewed at the NASA/JSC Gateway to Astronaut Photography of Earth. Caption by M. Justin Wilkinson, Texas State University, Jacobs Contract at NASA-JSC. 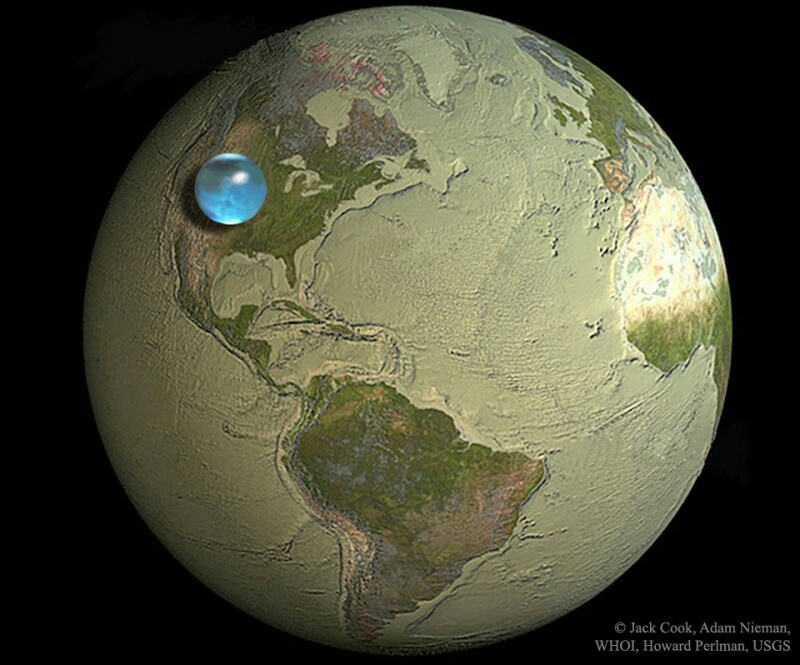 How much of planet Earth is made of water? Very little, actually. Although oceans of water cover about 70 percent of Earth's surface, these oceans are shallow compared to the Earth's radius. The featured illustration shows what would happen if all of the water on or near the surface of the Earth were bunched up into a ball. The radius of this ball would be only about 700 kilometers, less than half the radius of the Earth's Moon, but slightly larger than Saturn's moon Rhea which, like many moons in our outer Solar System, is mostly water ice. How even this much water came to be on the Earth and whether any significant amount is trapped far beneath Earth's surface remain topics of research.
Illustration Credit &Copyright: Jack Cook, Adam Nieman, Woods Hole Oceanographic Institution, Howard Perlman,USGS 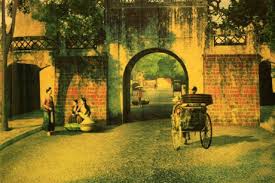 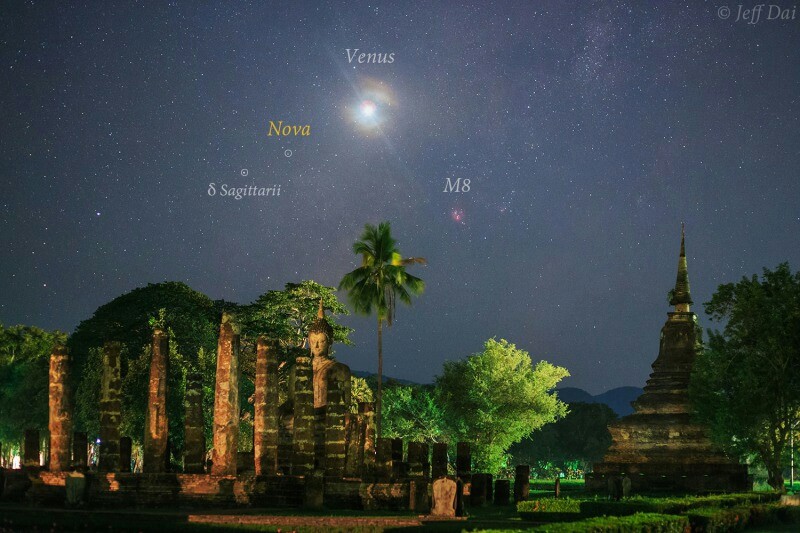 A nova in Sagittarius is bright enough to see with binoculars. Detected last month, the stellar explosion even approached the limit of naked-eye visibility last week. A classical nova results from a thermonuclear explosion on the surface of a white dwarf star -- a dense star having the size of our Earth but the mass of our Sun. In the featured image, the nova was captured last week above ancient Wat Mahathat in Sukhothai, Thailand. To see Nova Sagittarius 2016 yourself, just go out just after sunset and locate near the western horizon the constellation of the Archer (Sagittarius), popularly identified with an iconic teapot. Also visible near the nova is the very bright planet Venus. Don’t delay, though, because not only is the nova fading, but that part of the sky is setting continually closer to sunset.
Image Credit & Copyright: Jeff Dai (TWAN) 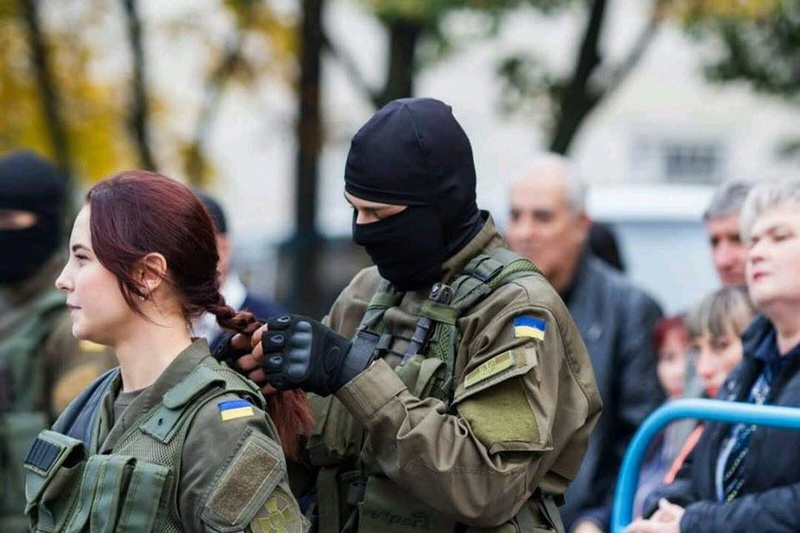 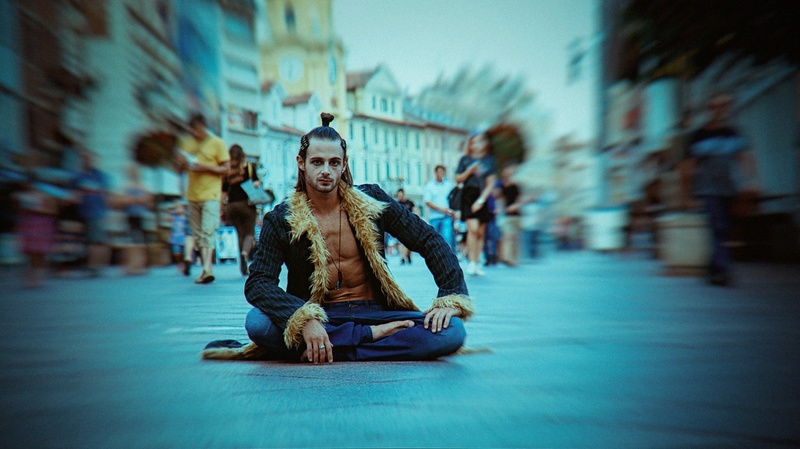