:flag_us::zap::flag_kz:US Secretary of State Anthony Blinken said that Washington had asked the Kazakh authorities to explain their request to the CSTO for the deployment of peacekeepers.
#USA 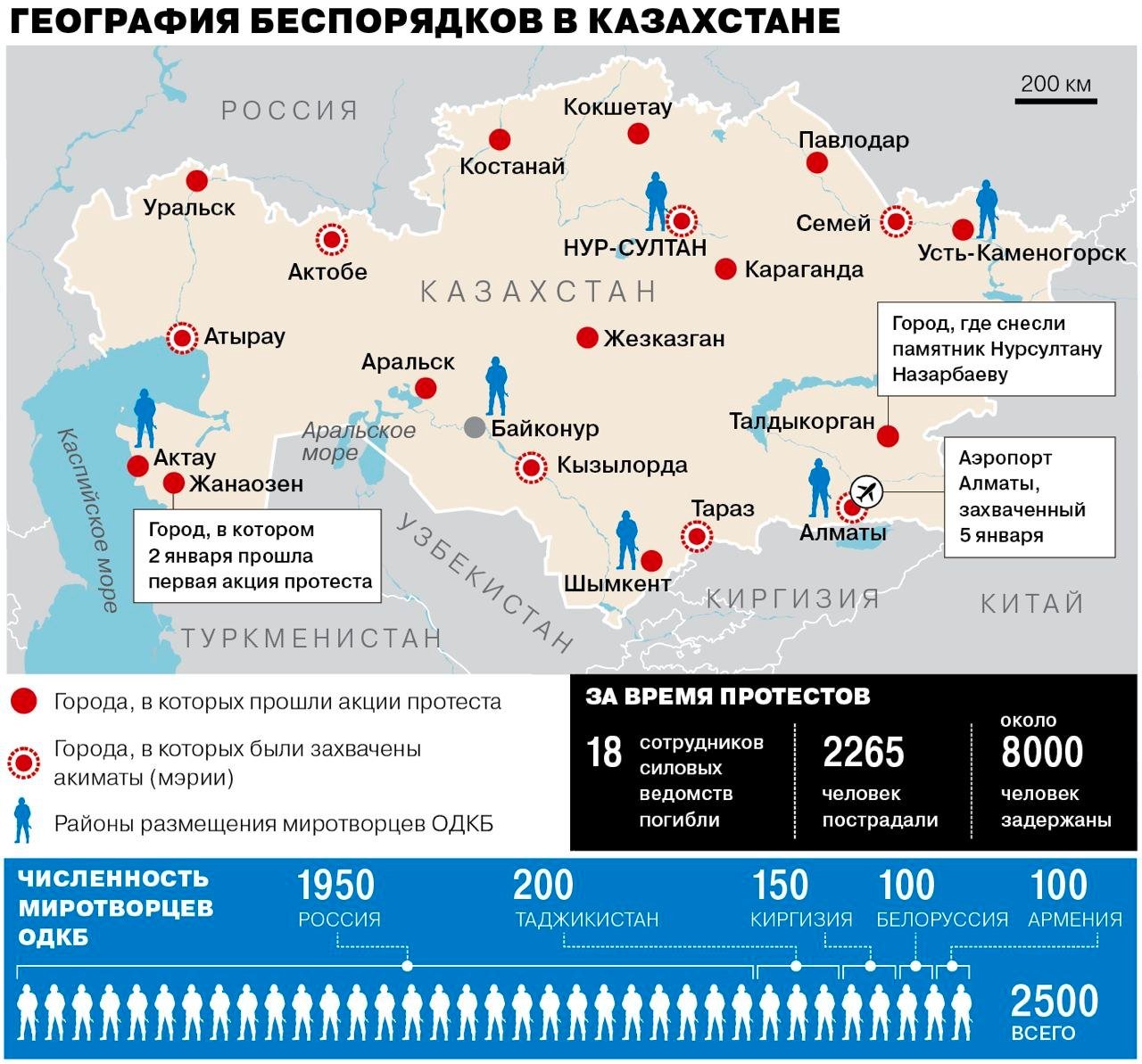 BERLIN, January 10./TASS/. The German Federal Cabinet urges Kazakhstan’s authorities to rescind their order to shoot without warning, all parties should refrain from violence, Deputy Spokesperson of the Federal Government Christiane Hoffmann told journalists in Berlin on Monday.


This order "must be rescinded," this is the position of Berlin, the deputy spokesperson stressed. "This order violates Kazakhstan’s legal commitments regarding respect for and protection of its own nationals," Hoffmann added.

NUR-SULTAN, January 10. /TASS/. The lawlessness and bloodshed that erupted in Kazakhstan turned out to be an attempted coup d’etat, Kazakhstan’s President Kassym-Jomart Tokayev said on Monday.
"Masquerading as spontaneous protests, a wave of mass riots unfolded when religious radicals, criminal elements, outright bandits, looters and petty hooligans emerged as if by a single command. The socio-economic, public and political demands vanished into thin air and were forgotten," the Kazakh president said at an extraordinary online session of the Collective Security Council of the Collective Security Treaty Organization (CSTO).
The Kazakh authorities heeded and fulfilled the protesters’ socio-economic, public and political demands, Tokayev said.
"Following this, a hot phase ensued and gangs of armed bandits waiting for their moment jumped into action. The main goal became obvious: to undermine the Constitutional order, take down the governing institutions and seize power. That is a coup d’etat," the Kazakh president stressed.


These nationwide riots were in the making for a long time, he said.
"As a person who knows about a full picture of the developments, I can responsibly say that all the events since the beginning of this year are links in the same chain. They are governed by a single destructive scenario that has been in the making for a long time. An investigation will reveal how long these preparations had been underway: for one year, two or three years," the president explained.
The terrorists acted with particular cruelty, Tokayev emphasized.
"These were the attacks by well-trained professionals, including snipers with special rifles. The terrorists used their own communications and disguised themselves with the uniforms of military and law-enforcement personnel," he said.
The gunmen cynically used the mass rioters as their human shields, the Kazakh leader stressed.
"Having five times the numerical advantage, the bandits attacked policemen and servicemen and beat them up with particular cruelty. They cut off the heads of two servicemen," Tokayev noted.
During their assault on military units and army checkpoints, the gangs attempted to seize weapons and combat vehicles, the Kazakh president said.
"Real battles took place in Almaty and other cities. For example, the battle for the Almaty interior department lasted two days. The police were engaged in repelling the terrorists’ attacks. In Almaty alone, seven weapons stores were captured," the head of state said.

NOVO-OGARYOVO, January 10. /TASS/. Kazakhstan has come up against international terrorism, Russian President Vladimir Putin said, addressing an extraordinary session of the Collective Security Treaty Organization’s (CSTO) Collective Security Council on Monday.
"This is indeed aggression stemming from international terrorism that we are witnessing right now," he pointed out.
"Where did those gangs of armed men come from, who received training at foreign centers and clearly had experience in fighting in hot spots around the world?" Putin posited.

3 Kazakh officials (from domestic intelluigence agency and Interior Ministry) died today. One had a heart attack, another committed suicide, and a third was found dead with injuries that show he fell from a window.... This comes after Toqaev said unrest was coup attempt...

3 Kazakh officials (from domestic intelluigence agency and Interior Ministry) died today. One had a heart attack, another committed suicide, and a third was found dead with injuries that show he fell from a window.... This comes after Toqaev said unrest was coup attempt...

NUR-SULTAN, January 12. /TASS/. Kazakh President Kassym-Jomart Tokayev confirmed that the withdrawal of the CSTO peacekeeping contingent from Kazakhstan will begin on January 13 at a meeting of the emergency operations center in Almaty, the presidential press service reported on Wednesday.
"Tomorrow, the organized pullout of the CSTO peacekeeping contingent will begin. I held talks with the leaders of states involved. Using the opportunity, I would like to express my gratitude to the contingent’s commandment for work accomplished over these several days. The presence itself of the CSTO peacekeeping contingent in Kazakhstan, including Almaty, played a very big part from the point of view of stabilizing the situation in our country," the Kazakh leader said.
According to him, this had a great psychological significance in deflecting the aggression of terrorists and bandits. "The mission is assessed as a very successful one. I once again express gratitude to my colleagues - the heads of state," the Kazakh president stressed. 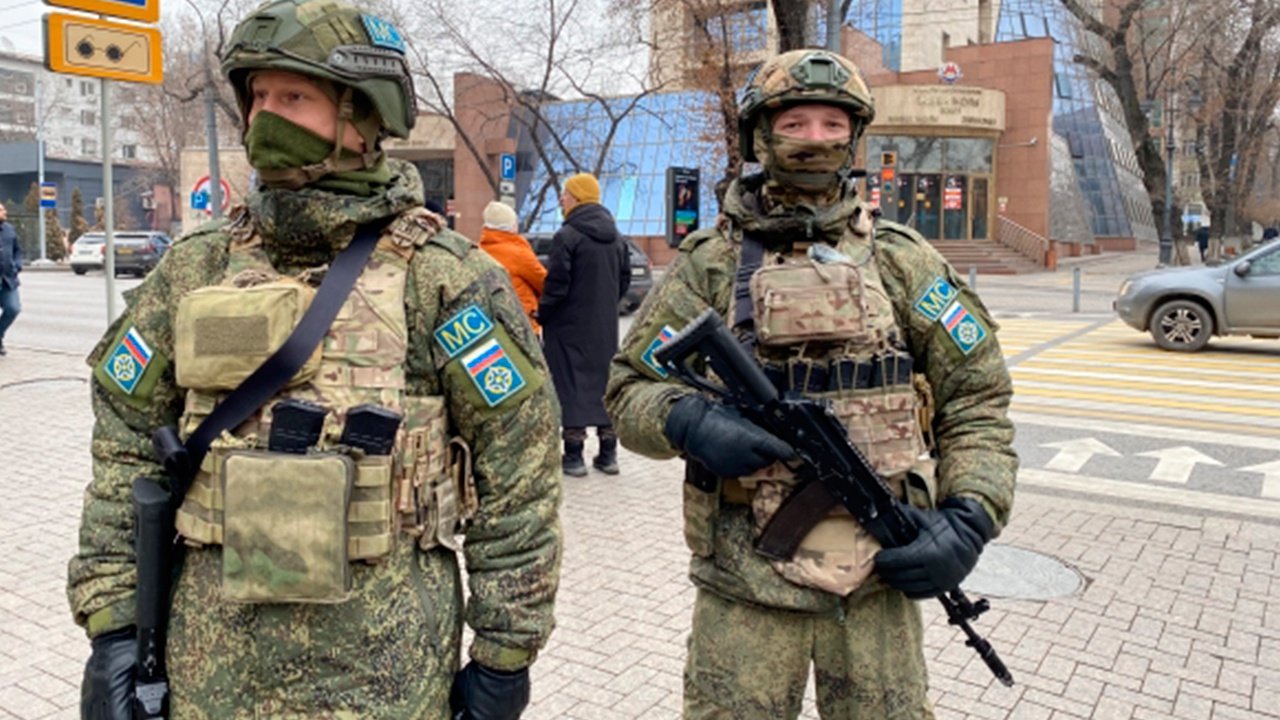