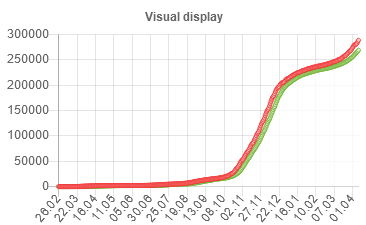 Four people recently died in Russia shortly after taking the Sputnik V anti-corona jab in previously unreported cases, which are being taken "seriously" by the EU regulator, the European Medicines Agency (EMA) in Amsterdam.

Six other Russians also had medical complications after taking the vaccine, according to internal case files from RosPotrebNadzor, a Russian body responsible for administering vaccinations, seen by EUobserver

The fourth one was not identified in the leaked files.

The deaths were heart, lung, or blood-sugar related and might or might not have been caused by Sputnik V, the dossier of Russian documents indicated.

The other six patients were younger men and women, one of whom was just 25.

They suffered a range of symptoms, including breathing difficulties, convulsions, swelling, muscle weakness, high blood pressure, headaches, dizziness, and fevers after their jabs.

The authenticity of one of the RosPotrebNadzor case files was officially confirmed by Denis Logunov, a senior virologist at the Gamaleya Research Institute of Epidemiology and Microbiology in Moscow, which developed Sputnik V.

"I requested information about this case and ... obtained a response. This case is not fake," he told EUobserver on Wednesday (7 April), speaking of the 51-year old woman, who died suddenly after taking her second Sputnik V dose.

"The case was investigated. No association with vaccination was found," Logunov, who recently co-authored a paper on Sputnik V safety in British publication The Lancet, added.

One of the non-fatal cases was covered by a Russian regional newspaper, PLN Pskov.

But the newspaper issued the same caveat as Logunov.

"Conspiracy theorists please calm down. This terrible syndrome [an illness the patient had] could develop from any harmless vaccine," PLN Pskov said.

EUobserver independently identified three other patients in the leaked files via their social media accounts, while another one was identified as a nurse in a local hospital in Ulyanovsk, a city in western Russia.

It was not possible to confirm the deaths, as there is no open-source death registry in Russia.

RosPotrebNadzor also did not reply to EUobserver's questions.
EMA corroboration

But for its part, the EMA, which is currently screening Sputnik V for EU-wide approval, confirmed it had also seen the RosPotrebNadzor case files.

These were sent to the EU regulator by a Russian whistleblower, who asked to remain anonymous, rather than via normal channels however, according to an email by an EMA official dated 26 March and seen by this website.

"We can confirm that all reports are treated seriously by the EMA and assessed directly," an EMA spokeswoman told EUobserver on Thursday, referring to the RosPotrebNadzor files on deaths and other complications.

"In this particular case, the report hints to the safety of the vaccine, which is a fundamental aspect to be evaluated both during the ongoing rolling review and in the assessment subsequent to the filing of a marketing authorisation application. For this reason, we cannot comment at this stage on the facts narrated in the [RosPotrebNadzor] report," she added.

The EMA's review was also "based on results from laboratory studies and clinical studies in adults", it noted.

The total number of cases (10) in the leaked files was tiny compared to the millions of people who felt fine after taking Sputnik V.

But Russia's lack of transparency, as well as worries over its poor data collection standards, posed the question if there were other unreported cases out there.

"There is a problem with under-registration of side-effects of drugs in Russia in general," Vasily Vlassov, an epidemiologist at HSE University in Moscow, told EUobserver on Wednesday.

The news on deaths after taking Sputnik V comes to light in a nervous atmosphere in Europe.

Some EU countries recently paused use of the British and Swedish-made AstraZeneca vaccine after isolated reports of blood clots.

And the general public felt alarmed, because pharmaceutical firms and regulators rushed through vaccine approvals in the Covid-19 emergency, Judy Twigg, a professor of political science at Virginia Commonwealth University in the US, said.

"Even if the adverse events [in the RosPotrebNadzor files] weren't linked to the vaccine, they still should have been openly reported," she told EUobserver.

"Data on all vaccines should be subject to high levels of scrutiny in order to minimise the risk of compromising public trust," she added.

"Open, well-communicated assessment of adverse events, the risks they pose, and appropriate measures to mitigate those risks offer the best path toward that," Twigg said.

The RosPotrebNadzor revelation also comes amid political tension on vaccines.

At the same time, Hungary has already started using Sputnik V despite the fact it has no EMA clearance yet.

And Austria, France, Germany, and Italy are in advanced talks with Russia on buying and joint production of its drug.
Vaccine geopolitics

The EMA, earlier this week, also told British newspaper the Financial Times it had ethical concerns about Russia's data-collection methods.

But amid Europe's appeals for fair play, the Kremlin is taking a strong line in defending its product from potential bad press.

"[The attack] aims to substantiate the promoted theses about the vaccine's 'inefficiency and danger' by faking mass deaths allegedly caused by the use of the medicine," the Kremlin source said.

kako ide ona paradigma "velikog reseta" - idealan kmet 21og stoljeća "-you will own nothing and you will be happy".  a oni će imati sve i biti će "unhappy"