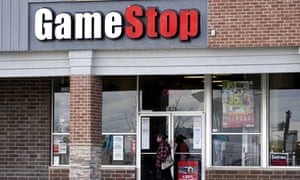 A woman wears a face mask as she walks past a GameStop store in Des Plaines, Illinois, US. Photograph: Nam Y Huh/AP
[size=89]The coronavirus pandemic hit GameStop hard. Like many retailers, already suffering from the shift to online sales, the video games chain is losing money and plans to close 450 stores this year. And yet, surprisingly, GameStop has become one the hottest stocks of the year.
The 37-year-old chain store group is now the focus of a David-and-Goliath battle between an army of small investors and Wall Street that shows no signs of abating and has highlighted some fundamental shifts in investing.
Last April, when the company announced mass closures, GameStop’s shares (GME) could be bought for $3.25 each. On Tuesday they soared another 92% to end the day at close to $148, pumped up again by small investors hoping to ruin Wall Street bets that the price would crash. It’s a bet that has, so far, proved very costly for the professional financiers. 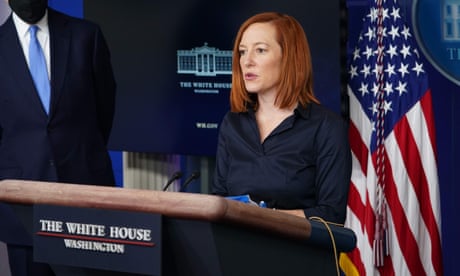 
The strange saga of GameStop’s cult status can be traced back to last September, when Ryan Cohen – investor and founder of the online pet food giant Chewy – took a 13% stake in the retailer and started lobbying for it to move more of its business online and become a serious rival to Amazon. Cohen and two associates were added to the company’s board in January.
The company’s share price began to soar as small investors snapped up a cheap stock using the trading app Robinhood and other services, seizing on what they saw as an ideal buying opportunity. Wall Street saw something else – a chance to “short” an ambitious bet against Amazon they believed was bound to fail.
Shorting a stock is risky. It involves “borrowing” a company’s shares and selling them with the intention of buying them back cheaper when the share price falls. Many Wall Street fortunes have been made this way, but if the price doesn’t fall, the losses can be huge.
About 71.66m GameStop shares are currently shorted – worth about $4.66bn. Year-to-date, those bets have cost investors about $6.12bn, which includes a loss of $2.79bn on Monday.
Monday’s stock gain of 145% in less than two hours, which extends GameStop’s gains for the year to more than 300%, is the latest sign that frenetic trading by individual investors is leading to outsize stock-market swings. On Tuesday, the party continued. When, and how, it ends is anyone’s guess.
GameStop has been the most actively traded stock by customers of Fidelity Investments in recent sessions, with buy orders outnumbering sell orders by more than four to one. The volatility prompted the New York stock exchange to briefly halt trading nine times.
“We broke it. We broke GME [GameStop’s stock market ticker] at open,” one Reddit user wrote on Monday after the NYSE halted trading.
Ihor Dusaniwsky, a managing director at the data analytics company S3 Partners, called the situation “unique”. Established investors were still betting that the company’s sky-high share price would – eventually – collapse, ignoring earlier losses “and using any stock borrows that become available to initiate new short positions in hopes of an eventual pullback from this stratospheric stock price move,” he said. 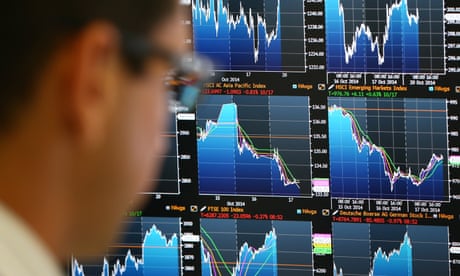 Business Today: sign up for a morning shot of financial news


“Much like the revolutionary war, the first line of troops goes down in a rain of musket fire but is replaced by the troops next in line,” Dusaniwsky added.
The battle has become a war of attrition between a new generation of investors and established, more diversified players.
Investors on the WallStreetBets subreddit forum have been promoting GameStop aggressively, with many pitching it as a battle of regular people versus hedge funds and big Wall Street firms.
“This is quite the experience for my first month in the stock market. Holding till infinity,” posted one user on the thread. Another user said: “We’re literally more powerful than the big firms right now.”
In some cases, they’ve been right, with larger investors like Citron Research taking a sharp lesson in what can happen when “herd investors” squeeze a stock higher.
Citron’s founder, Andrew Left, called GameStop a “failing mall-based retailer” in a report earlier this month and then predicted that the stock would plunge to $20 in a video he posted to Twitter on Thursday.
According to CNN, Left has now given up on shorting the stock, citing harassment by the stock’s backers. 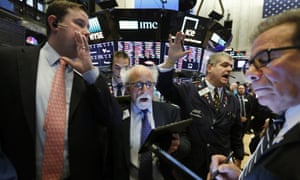 Facebook[url=https://twitter.com/intent/tweet?text=How GameStop found itself at the center of a groundbreaking battle between Wall Street and small investors&url=https%3A%2F%2Fwww.theguardian.com%2Fbusiness%2F2021%2Fjan%2F27%2Fgamestop-stock-market-retail-wall-street%3FCMP%3Dshare_btn_tw%26page%3Dwith%3Aimg-2%23img-2]Twitter[/url][url=http://www.pinterest.com/pin/create/button/?description=How GameStop found itself at the center of a groundbreaking battle between Wall Street and small investors&url=https%3A%2F%2Fwww.theguardian.com%2Fbusiness%2F2021%2Fjan%2F27%2Fgamestop-stock-market-retail-wall-street%3Fpage%3Dwith%3Aimg-2%23img-2&media=https%3A%2F%2Fmedia.guim.co.uk%2Ff152803274f588c1bd241fe4b2e94f724b5eeb48%2F0_36_5760_3456%2F5760.jpg]Pinterest[/url]
‘We broke it. We broke GME at open,’ one Reddit user wrote on Monday after the New York stock exchange halted trading. Photograph: Richard Drew/AP
Another loser is Melvin Capital Management, a hedge fund that has lost 30% of $12.5bn under management this year on a series of short positions, including exposure to GME. On Monday, Citadel LLC and its partners announced it would invest $2bn in Melvin, and Point72 Asset Management (the New York Mets owner Steve Cohen’s firm) would invest an additional $750m on top of $1bn already in the fund.
“As someone who started trading stocks in the late 90s in college, I would always remember watching when the small retail trading groups would get crushed by hedge funds and savvy short-sellers,” Oanda market analyst Edward Moya said in a report. “What happened with GameStop’s stock is a reminder of how times are changing.”
The battle has spread further, with some accusing the financial media of backing institutional Wall Street players. In an open letter to CNBC, one Reddit user wrote: “Your contempt for the retail investor (your audience) is palpable and if you don’t get it together, you’ll lose an entire new generation of investors.”
But others warned that conditions represent market intoxication. “This is the new day and age in which no one listens to the analysts: ‘Why bother, let’s just go out and buy it ourselves?’” Lars Skovgaard Andersen, investment strategist at Danske Bank Wealth Management, told the Wall Street Journal. “It is a sign of high complacency.”
The short-squeeze war over GameStop stock is just the latest in a series of conflicts perhaps exemplified by the war over Tesla stock. Last year, short-sellers of the electric vehicle maker lost $38bn, which S3’s Dusaniwsky called “the largest yearly mark-to-market loss I have ever seen”.
It is too early to say how long the GameStop saga will continue, or how it will end, but some analysts believe both sides in this skirmish could learn some hard lessons.
“I think the millennials will temporarily be rewarded, and a short-squeeze is definitely conceivable,” the investor Erika Safran at Safran Wealth Advisors said. “The stock can get pushed up so that at some point the short-sellers will fold and make the stock go higher. Eventually, it may trend down to the fundamentals of what a stock like this is willing to accept.”
Safran has in the past warned that Robinhood, the vehicle many long-investors are using to make trades in GameStop, is behind investment strategies that financial planners generally warn against.
“It’s ironic to me and other professional advisers that over decades we have moved away from an individual stock-picking philosophy to broad stock diversification, and this is the exact opposite,” Safran says. “Investing is not just buying one stock.”
Safran says the strategy of driving up a stock in the hope of forcing a short-squeeze and riding an a individual stock are hallmarks of a conflict between the new, individual investment strategy and the old guard that recognized financial success requires diversification.
“Someone’s got to be wrong, but that’s what makes a market,” Safran says. “I think it will be an education for some and a good story for everyone else.”
link: https://www.theguardian.com/business/2021/jan/27/gamestop-stock-market-retail-wall-street[/size] 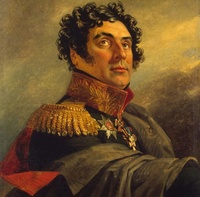 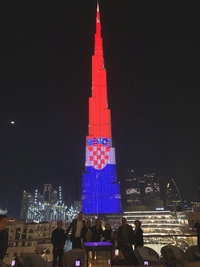