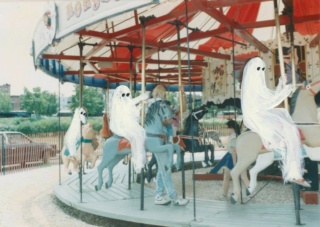 Eddie Van Halen has passed away after a long battle with cancer. The legendary VAN HALEN guitarist was 65 years old. His death was confirmed by his son, and VAN HALEN bassist, Wolfgang Van Halen.
Wolfgang wrote: "I can't believe I'm having to write this, but my father, Edward Lodewijk Van Halen, has lost his long and arduous battle with cancer this morning.
"He was the best father I could ever ask for. Every moment I've shared with him on and off stage was a gift.
"My heart is broken and I don’t think I’ll ever fully recover from this loss.

"I love you so much, Pop."
According to TMZ, Eddie died at St. John's Hospital in Santa Monica, California. His wife, Janie, was by his side, along with Wolfgang, and Alex, Eddie's brother and VAN HALEN drummer.
The site reports that Eddie's ongoing health battle went massively downhill in the last 72 hours, with doctors discovering his cancer had moved to his brain as well as other organs.
There have been a lot of rumors regarding the VAN HALEN guitarist's supposedly worsening health, with TMZ reporting recently that Van Halen has been traveling between the U.S. and Germany for cancer treatment going on several years now. The site later said that "the sad medical news had some folks thinking Eddie was on his death bed ... but we're told that's anything but the case."
Back in September 2019, singer David Lee Roth said that there were no plans for VAN HALEN to do anything for the foreseeable future. "I think VAN HALEN's finished and this is the next phase," he said, referring to his solo project. "And that being said, Eddie's got his own story to tell. Not mine to tell it."
Last October, Eddie stopped by a McLaren dealership in Beverly Hills and mingled with the sales team, taking pictures and even giving one fan a kiss. A few days later, he was photographed at a spinal neurosurgeon's office in Beverly Hills.
A rep for Van Halen had no comment on TMZ's initial report when reached by Fox News.
Early last year, rumors were rampant that the classic-era lineup of VAN HALEN would reunite for the first time since 1984. It's unclear why the tour didn't happen, though there has been online chatter that a health setback involving Eddie Van Halen might have been responsible.
Last November, TMZ reported that Eddie spent several days in a hospital due to complications from his cancer treatment. Sources close to the legendary guitarist told the site he was admitted to the hospital with intestinal issues and abdominal pain, both the result of a bad reaction to the drugs Eddie was reportedly taking to battle throat cancer.